Open petition to the European Parliament: The European Central Bank may be responsible through operational structure of its instruments for violations of the Charter of Fundamental Rights of the European Union.

The petition is described and discussed in the publication “The European Central Bank as a Sustainability Role Model” (Springer 2020). The latest commnication with the committee of petitions of October 2020 can be found here: Committee on Petitions_EZB-Weltethos_Bolsinger

Summary and update of petition 0429/2017 to the European Parliament: European Central Bank (ECB) involved in a massive number of violations of the Charter of Fundamental Rights of the European Union through possession and trading of unethical securities.

you were asked by the European Parliament’s Committee on Petition 0429/2017 for an opinion. To make this easier for you, I have summarized the facts and attached an update of my study::[1]

4,781 Banks and savings banks were obliged in the euro area in 2017 to hold minimum reserve assets with the ECB (or its national central bank). A further 2,493 financial institutions and funds were listed business partners of the ECB for refinancing operations. This meant that 7,274 banks, savings banks, money market funds and financial institutions, including national central banks, were obliged to hold so-called eligible collateral for monetary policy transactions with the ECB in their portfolios. The traded volume of these securities currently stands at around €14 trillion and is thus a major lever for or against the realisation of European values in the real economy. The ECB (or the respective national central bank as vicarious agent) becomes the owner of the relevant securities as a pledgee eligible collateral. Trade in and possession of securities which undermine the Charter of Fundamental Rights of the European Union is detrimental to the European Union. For a European institution such as the ECB, this is unacceptable and cannot be justified by independence in monetary policy. [2]

The ECB’s website provides access to its daily updated list of marketable collateral accepted as collateral for monetary policy operations (= marketable eligible collateral). In addition, there are also unpublished, non-marketable securities that meet the eligibility criteria and are accepted as collateral. The marketable securities of all issuers meeting the central bank eligibility criteria on January 3,2018 were examined by the independent sustainability rating agency oekom research AG (oekom) on January 4,2018 with daily ratings. Of the 29,445 securities, 25,111 were examined with daily ratings, which corresponds to a coverage ratio of 85%. Once again, the investigation focused only on serious and very serious ethical controversies of the aspects of the EU Charter of Fundamental Rights, which were examined in 2017 (Article 32 Child Labour; Article 37 Environmental Protection; Article 5 Violations of human rights, such as forced labour; tax avoidance and corruption). The audit again revealed the following alarming results (and thus an increase in infringements):

Type of controversy:      number of securities in the ECB register of marketable
collateral:

Serious controversies in business conduct regarding…

In order to remedy the deplorable state of affairs simply and effectively, the permanent non-infringement of the EU Charter of Fundamental Rights must be included in the criteria for eligible collateral as a condition for admission. Compliance with the EU Charter of Fundamental Rights is regularly verified by a current ethical rating. In terms of competition policy, the ethical rating can be transparently mapped by means of the independent ethical ratings already available on the market from established rating agencies to which the ECB and all other financial market players have access at all times.

[2] In accordance with Article 51 the ECB is bound by and not above the Charter of Fundamental Rights of the European Union.

The European Parliament is asked for regulation, so that there can be no more direct or indirect involvement in violations of the Charter of Fundamental Rights of the European Union by the European Central Bank.

In the currently practiced collateral policy and asset purchase programs of the ECB most basic ethical aspects are not visible. No rating obligation exists for the consideration of such aspects. This is inappropriate for one of the most important institutions of the European idea and works directly against the political efforts to a decent, corruption-free, environmentally sensitive and sustainable European Union.

To resolve this situation, the ECB and all banks in the Eurosystem should be obliged to explicitly…

2 … create transparency for these transactions in the form of publicly available sustainability ratings.

The author of this petition evaluated 26.110 securities accepted by the ECB for minimum reserve with sustainability rating data from oekom research AG and found alarming results. There were thousands of points of critique in respect of …

The petition in German language with evaluation details is described here. It is registered on 15.05.2017 with the Nr. 0429/2017 under the title “Verpflichtung der Europäischen Zentralbank auf EU Grundrechtscharta“.

On 29.11.2019 experts discussed the topic in Frankfurt as following: 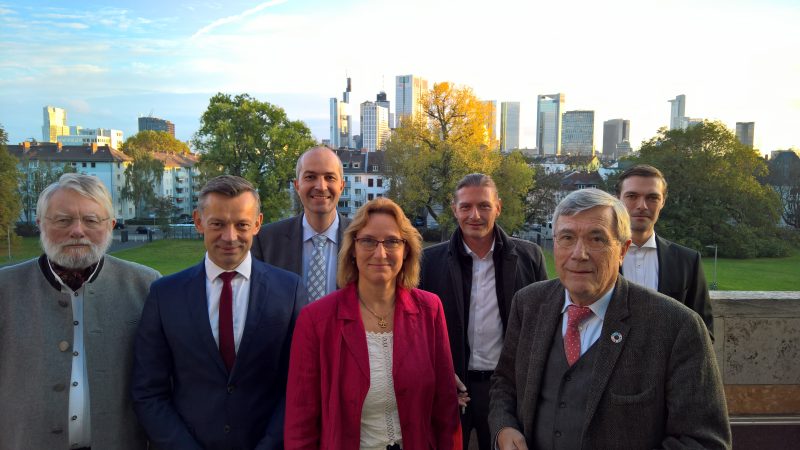 Sustainable Europe: The ECB as a cardinal error?

The ECB has an internationally unparalleled special role among central banks.

Frankfurt – At the meeting of the “Weltethos-Institut” Research Group on Economics and Finance in cooperation with financial market experts from the Goethe University in Frankfurt and the University of Applied Sciences in Würzburg-Schweinfurt (FHWS), the ECB’s ethical dimension as a body of the European Union was examined in detail for the first time. What was previously only known to experts: the European Commission shapes the ECB’s regulatory framework in the form of guidelines and the ECB is accountable to the European Parliament as a supervisory body. As a result, the ECB plays a special role among the central banks, that is incomparable at international level.

On 29 October 2019, experts discussed the ECB’s commitment to the Charter of Fundamental Rights of the European Union with the audience in the Eisenhower Hall of the Goethe University in Frankfurt, moderated by Gerhard Hofmann and Benedikt Hoffmann. Johannes Hoffmann, Bernd Villhauer, Harald Bolsinger, Michael Schmidt, Christian & Marian Szidzek, Patrick Weltin and Susanne Bergius used the most important perspectives to illustrate the monetary freedom and regulatory boundaries of Europe’s central bank. It became clear that monetary independence cannot be a licence for the ECB to disregard fundamental rights. 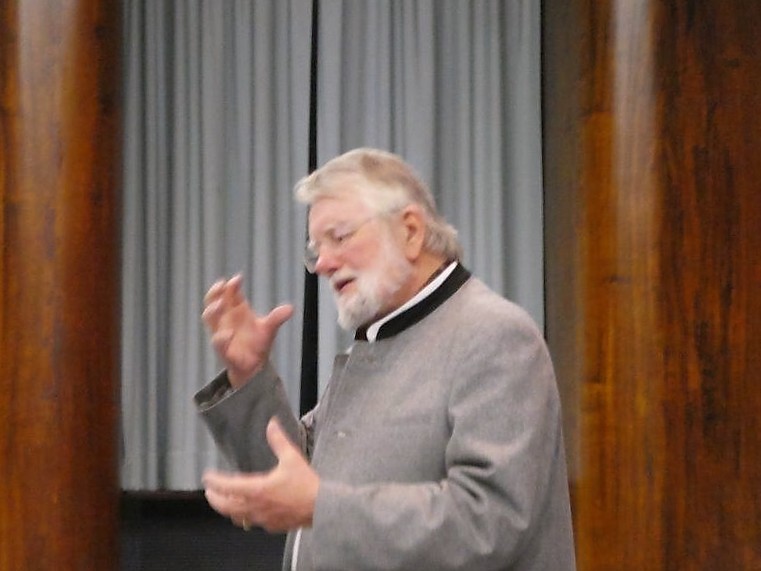 Prof. Dr. Johannes Hoffmann, Goethe University and founder of the former research group Ethical Ecological Rating, now based at the Weltethos-Institut, impressively demonstrated the development of sustainable finance in Europe. Dr. Bernd Villhauer, Managing Director of the Weltethos-Institut at the University of Tübingen, thematized moral requirements for the ECB beyond monetary policy. The Würzburg business ethicist Prof. Dr. Harald Bolsinger from the FHWS gave insights into the relevance of fundamental rights in the core business of the ECB and reported on experiences with a relevant EU petition 429/2017 (see: http://bit.ly/2z1vsVj ). 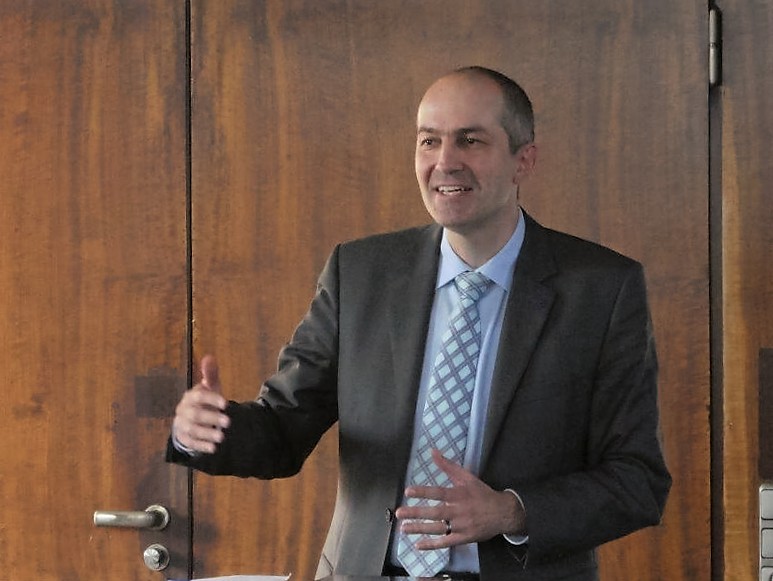 Bolsinger: “It is overdue urgeing the ECB to take European values into account in its financing and collateral practices. We must be able to expect the European Central Bank not to violate at least the values of the European Charter of Fundamental Rights in its core business.” Bolsinger says. On the way to a sustainable European financial system, respect for fundamental rights in the ECB’s business conduct must be at the beginning of all initiatives: “If the ECB acts as a role model within the framework of the Charter of Fundamental Rights, which is binding for the ECB anyway, she will have an impact on all financial market players. If she does not, then all other political initiatives for a more sustainable financial system will be wastepaper!” 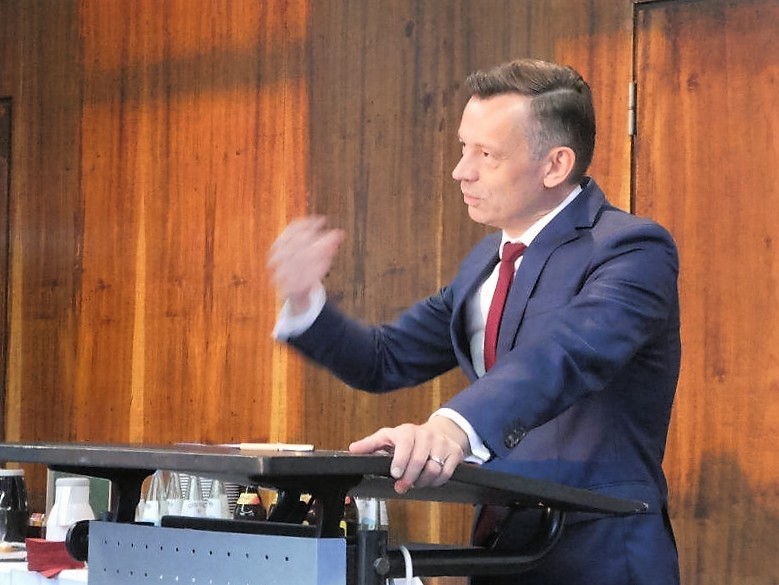 Michael Schmidt, Chief Investment Officer (CIO) of Lloyd Fonds AG, then used the ECB’s successes to describe the safeguarding of price stability as the greatest good, for which the independence of the ECB was absolutely essential. The Sustainable Finance High Level Expert Group of the EU had not made any recommendations on central bank behaviour, as the ECB was independent and therefore recommendations in this direction were not in demand and could not be implemented, said Schmit. The Würzburg lawyers Dr. jur. Christian Szidzek and Marian Szidzek (thales-datenschutz.de) vehemently contradicted this and proved the duty of the ECB to observe fundamental rights also in its business conduct as an EU institution. They pointed out options for legal steps to make the ECB fulfilling her duty. Patrick Weltin, banking analyst at imug rating, took a look at the ECB’s sustainability in its core business, which could be greatly improved, and Susanne Bergius from Handelsblatt Business Briefing Sustainable Investments explained positive examples of progressive national central banks in Europe on the way to implementing sustainability in their core business. After a lively discussion with the experts and the audience, Prof. Dr. Johannes Hoffmann concluded with an appeal to apply the current regulatory framework of the ECB with regard to its fundamental rights obligation.

On 11 November 2019 3 p.m., EU Petition 429/2017 was once again on the agenda of the Petitions Committee of the European Parliament in Brussels:

On 11 November, the Würzburg business ethicist Professor Dr. Harald Bolsinger presented research findings on the European Central Bank’s (ECB’s) compliance with fundamental rights to the Brussels Petitions Committee of the European Parliament and appealed to parliamentarians to encounter the Eurosystem’s ethical blindness politically. According to his research, around 20 percent of the securities that the ECB accepts as collateral for loans to commercial banks are subject to serious ethical controversy. The cases range from child labour, forced labour, corruption, tax avoidance and environmental destruction to allegations of terrorist financing and the manufacturing of weapons. The market volume of the securities examined amounts to around EUR 14 trillion and thus has a significant influence on the reality of life of EU citizens.

After recommendations by the European Commission, representatives of the political groups in Parliament commented on the demands of Petition 0429/2017, stressing its fundamental importance for the sustainable direction of the European Union and deciding to pursue the matter politically. Bolsinger’s demands will be discussed with the new ECB leader and also in the Economic and Monetary Affairs Committee of the European Parliament.

“It is a stroke of luck that the resubmission of the petition to the Committee on Petitions has lasted from 2017 to the present,” Bolsinger comments, as the opportunity for change through new policies by Christine Lagarde now exists for the ECB, Vladis Dombrowvskis for the Commission and new leaders in the parliamentary Economic and Monetary Affairs Committee. “Never before in the history of the EU has the central bank created transparency for the Parliament about the fundamental rights compliance of its portfolios, although transparency and credible communication in all areas are the most important elements of successful central banking “, Bolsinger explained his demands and continued: “I hope that Mrs Lagarde will make the ECB a role model for all central banks worldwide on this point and that our EU Parliament will be able to gain a lasting picture of the significance of European core values in the core business of the central bank on the basis of reliable data”. The regulatory framework of the EU Charter of Fundamental Rights has been valid law for the ECB since the Treaty of Lisbon, explains the business ethicist of the Faculty of Economics at the FHWS.

Recording of the meeting of the Committee on Petitions (from minute 15:11):